Blockly is super powerful and relatively easy to use but at some point there will be some nuance or use case that cannot be achieved through Blockly. Or perhaps the graphical representation is too limiting. For what ever reason, openHAB has you covered with text based Script Actions and Script Conditions.

openHAB supports a growing list of programming languages in which rules can be written. openHAB comes with the following languages to choose from:

In addition to these default choices, one can install a number of different languages as an Automation add-on. Such diverse languages as Python, Ruby, Groovy, Java, and more are available with more to come. See the add-on docs for the reference guide and specific information for how to use each individual add-on. Take note, not all automation add-ons support writing rules in the UI.

For the rest of this tutorial we will use the JavaScript Scripting add-on which implements ECMAScript 2021 for Script Actions and Script Conditions in UI rules. See the add-on's reference for how to write rules in text files which is outside the scope of this tutorial.

To install a new rules language navigate to Settings -> Automation and install the add-on desired. The next time you create a Script Action or Script Condition, if it's supported, the new language will be selectable.

All of the rules languages will run inside the Java Virtual Machine. This gives all these languages access to all of the Java standard library of classes. Furthermore, all direct interactions with openHAB itself is done through Java Objects and Classes. What does this mean? It means that sometimes an int isn't just an int. If you are going to write rules to directly interact with openHAB, you will have to be very conscious of where the data comes from and what its type is.

In order to make that process easier, most of the automation add-ons offer a Helper Library. These libraries come in various forms and are installed in different ways but they all endeavor to do the following:

See the previous pages of this tutorial for details on creating a rule. The steps are the same no matter what language is to be used. Consequently this tutorial won't talk about the rule triggers at all.

One can combine and use multiple languages in the same rule, for example using a simple UI Condition and a Blockly Script Condition along with a Script Action written in Rules DSL and second one written in ECMAScript 2021.

For consistency and the ability to compare approaches, this part of the tutorial will use the same set of requirements as was used in the Blockly tutorial. As a reminder, we want to turn on a light when motion is detected and keep that light on for 30 minutes after the last motion was detected. But it should only do this between sunset and 23:00.

See the previous pages. Triggers are set up the same way for all UI rules. We will use the same trigger from the Blockly tutorial. 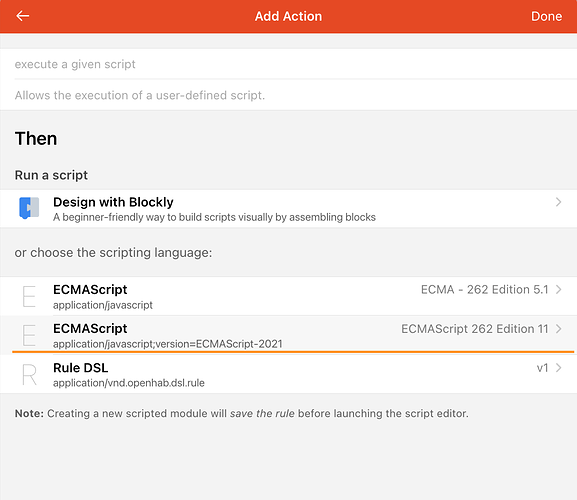 This will open a blank text field where you can start typing your code. This text field provides text highlighting and some code completion which helps with coding.

As previously mentioned, the Helper Library for this language comes with the add-on and is imported by default, so see the JavaScript Scripting add-on's reference for the full guide on how to do anything you might want to do. For help with general JavaScript coding, there are tons of tutorials and reference documents on the web a search away.

As with the Blockly example, we want to start the rule using a log statement we can see in openhab.log when the rule runs. One can either use the log actions but most will find it easiest to use the more JavaScript native console.

Save and test the rule by running it manually and verify you see this statement in the logs.

Next we want to sendCommand to the light to turn it on. Reading the docs we see that access to the Item registry is provided through Items where we can get access to a JavaScript Object that represents the Item. This Object has a sendCommand() function that takes the command.

Save and test and verify you see the log statement and the Item receive an ON command.

Now we want to create a Timer to go off in 30 minutes. We find the Timer creation documented under ScriptExecution. A Timer will execute a block of code passed to it as the second argument at the time specified by the first argument.

To define date times, the JS Scripting Helper Library includes the JS-Joda library which provides a very robust set of classes to create and manipulate dates and time. We need to use this library to specify the time when the timer should run.

Now all we are lacking is the ability to reschedule that timer if motion is seen again in the 30 minute period. Looking back at the docs we find the cache. This is a map of key/value pairs that exists outside of the rule. Given that position it is able to share data between different rules or between runs of the same rule. We will use it to save that Timer so we can reschedule it later when needed.

Notice that we use the ruleUID which is a variable made available by the Helper Library to ensure that we don't overwrite on something added to the cache from another rule. Also notice a line was added to lightsOut to delete the entry in the cache when the timer ran. That will cause the rule to create a new timer the next time the rule runs. It could be coded to reuse the Timer instead which is an exercise for the reader.

Save and test that the rule sends the on and off commands as described.

# But only if: Conditions

Now we want the rule to only execute between sunset and 23:00. Create a new Condition and choose ECMAScript 2021 as the language. Just like with the Script Action, the Helper Library is available by default.

As discussed in the Blockly tutorial, the last line of a condition must evaluate to true or false. When true the rule will run, otherwise it's skipped.

Sunset is available in an Item called Sunset and we need to test to see if now is between then and 23:00. In order to do that we need to convert the Sunset state to a JS-Joda date time.

Next, we need to create a ZonedDateTime for 23:00 today. Looking at the JS-Joda docs we see how to do that.

Now all we have to do is see if now is between those times.

Most of the languages support installation and importing of third party libraries. Many of the languages will have special tools to download and install these libraries and there might be extra requirements to use them in openHAB. See the add-on's docs and the forum for details on the automation add-on chosen.

For JS Scripting, npm is supported for the installation of third party libraries. Run the npm command from the $OH_CONF/automation/js folder. This will create a node_modules folder (if it doesn't already exist) and the library will be installed there. Use var name = require('name_of_lib'); to import the library into your Script Actions and Script Conditions.

Any language that supports such libraries will also allow you to create your own personal library where you can create functions, data structures, and classes that can be reused across your Scripts Actions/Conditions. For example, some functions to centralize alerting is a good idea.

For JS Scripting, look up tutorials for how to create an npm module for how to write your own personal libraries. I find it easiest to write the library in a separate folder, tar it up and use npm to install your library from the tar file. That keeps it from being modified or overwritten by npm when upgrading or installing/removing other third party libraries.

There are several third party openHAB specific libraries on npm already. Search the forum for details.

All the same advice from Blockly applies here too. Gradually build up your rule, testing at each step. Use logging liberally. Break up your code into functions you can test independently. Simplify complicated lines by breaking them up. Watch the logs for errors.